Mr. Vasilijs Mihailovs , Author Of The "Siamese Coins From Funan To The Fifth Reign" Passed Away On 11th August 2015. 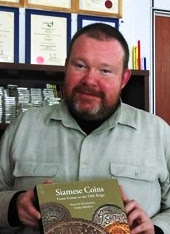 On late afternoon today, WY Kong messaged me that our numismatic good friend Mr. Vasilijs Mihailovs from Thailand has passed away yesterday (11th August 2015). I was really very shocked and sad to hear the bad news.

To double confirm the sad news, I send a message to Mr. Vitoon Eurtivong, , the owner of Eur-Seree Collecting Co Ltd. Auction Bangkok, Thailand. He replied," He passed away on 11th August during a medical operation in Latvia. Last time I met him was at my auction on 2nd August (2015)".

According to WY Kong, he was just communicating with him via email few days ago, and wishing him good luck for the surgery. He went for a gastric bypass surgery for weight control, usually not a high risk surgery. 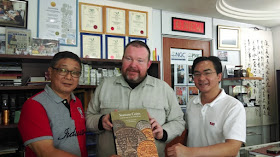 Mr. Vasilijs Mihailovs (Age:37) visited my Dickson Niew Collection at Subang Jaya shop on 18th May 2015. He was accompanied by WY Kong. He loved "Chili Padi", when I treated him lunch at the restaurant next to my shop, he enjoyed what he claimed is one of the best roasted duck that he has ever had before. I asked him to signature his book "Siamese Coins From Funan to the Fifth Reign" for me for the second time, he did. The first time he signature for my copy when he was in Singapore.

On 29th July evening he visited my BlogSpot:: http://dniewcollectors.blogspot.com/2014/07/siamese-singgora-tin-coin.html#ixzz3ibrBG7qp . I received his last comments:

Comments From: Vasilijs Mihailovs (To Dickson Niew) ( 11:51 PM 29-7-2014)
"I will discuss this piece with Ronachai Krisadaolarn on Friday. I have never seen anything similar to that. The Thai script does say "Songkhla"; the Jawi script spells "Malik Al-Adil" with a couple of script mistakes, suggesting that the coin might have been produced in what is Thailand today, not in Malaysia. I will follow up on this coin - if genuine (and so far it looks genuine to me), this is a very interesting specimen."

Can you send me the picture files by email please, along with weight and diameter?

Are you coming to the Bangkok auction this weekend by chance?

Mr. Vasilijs Mihailovs was born in Latvia in 1978. He first visit to Thailand took place in 1997, when he was awarded the Thai National Commission for UNESCO Scholarship and as an undergraduate student in natural Science attending six months at Kasetsart University in Bangkok.Fascinated with Thailand's exotic environment, upon returning to his home country he switched his focus to Asian Studies and graduated MPhil Asian Studies sums cum laudae  in 2003 and 2011 he has taught the introductory course to Thai History at the University of Latvia, lectured by invitation at Silapakorn University. The Siam Society and Southeast Asian Ceramics Museum, as well as spoken at several international conferences and published a number of academic articles devoted to the ancient coinage of the region. He is a life-time member of the Numismatic Association of Thailand.

First ever book in English, on Siamese coins .Richly illustrated with over 1,000 coins, as well as Sukhothai inscriptions and previously unpublished material from the Royal Archive .

This is the first ever book in English about Thai coins and ethnographic monies. It covers the time period from the earliest proto-state up to the introduction of the baht currency system. It describes the development of Thai money through a continuous economicohistorical review with excerpts from a variety of sources, including the Sukhothai inscriptions, the Royal Chronicles of Ayutthaya, the records of individual Dutch, French and Portuguese travelers and unpublished documents from the Royal Archive. Also featured are over 1,000 specimens of the coins which have circulated in modern-day Thailand and its tributary states. Included are a selection of Thai documents from Rama IV's reign dealing with the emission of new currency, counterfeits and money reforms."